Today's post is a recipe for this delicious fajita bowl. I had groceries delivered a few times in January and apparently you are no exempt from buying too much when you're ordering online. I got some frozen veggies to keep on hand since I kept wasting the fresh stuff but then I ordered more fresh stuff when I had the stuff in the freezer... I'm pretty smart :)

Anyway, I got caught up on the fresh stuff so onto the frozen stuff. However, you can obviously use fresh peppers and onions for this recipe, I just happened to have a frozen mix of red, green, and yellow peppers, and onions that was perfect for fajitas! I also had fresh mushrooms that needed to be used so I sliced those babies up and sauteed them in olive oil for a few minutes before adding the frozen mix.

I used my Epicure fajita seasoning mix but it can be replaced with a homemade mix or store bought, whatever works for you. 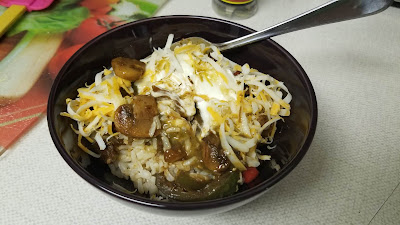 This recipe made enough for two smaller portions since I don't eat large meals, normally. You could double this recipe to make 3 larger portions if you want. I used my rice cooker to make my brown rice - if you cook a lot of rice or quinoa I do recommend getting one. I bought mine when it was on sale for under $15 from Canadian Tire. I wouldn't spend more than that on it though, use a pot or pressure cooker lol. It cooks it perfect every time and I like that I just set it and forget it until the button pops.

I'll admit the pictures don't make it look very appealing but I assure you this took me to flavor town! I topped mine with shredded cheese, sour cream, and salsa verde. To make this vegan omit the dairy and to make it with meat replace the mushrooms with your choice of meat (I'd recommend cooking the meat first, taking it out of the pan, and then add back to the veggies when they're almost done cooking.) 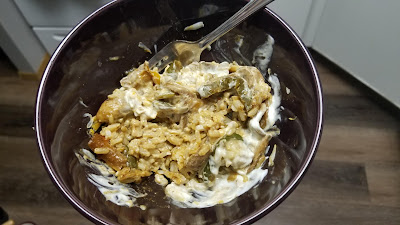 Let me know if you enjoyed this as much as I did. It was so yummy and made me even more excited to be in Mexico again in less than two weeks!