I have been grilling up a storm the past few days. I bought my boyfriend this grill for Christmas because he misses being able to BBQ but I think I'm more excited about this thing than he is. The picture below was from my lunch yesterday. I made it before work and it was the easiest thing. It took a few minutes to preheat, I threw the burger on and continued getting ready, and it was done 5 minutes later. 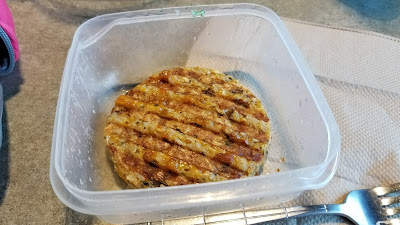 I bought this grill during the Black Friday sales, so I got it for 50% off. In the few times I've used it, I can say it's totally worth the money. It heats up fairly quickly, food doesn't stick, there are 4 temperature settings including a sear option for steaks and burgers, and the plates come off and are dishwasher safe, although I'll probably just hand wash them, but the fact that they come off is awesome. 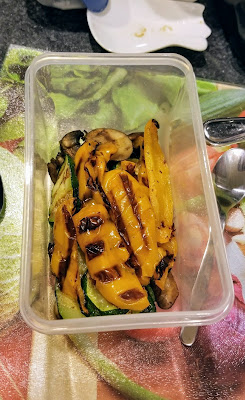 Last night I whipped up a quick lunch of grilled veggies and a black bean burger. Just look at those grill marks 😍 The zucchini and mushrooms took about 10 minutes, the peppers were about the same, and the burger was 5 minutes. So I had cooked my lunch in under half an hour with very little effort other than chopping the veggies.

I made a grilled cheese on this last night as well and it turned out nice but I wouldn't recommend using a fluffy bread like Wonderbread because it was pretty smooshed. A more sturdy bread like rye or like Dempsters grainy breads would fare well for this purpose.

I will provide updates on this as I try cooking more foods on it but so far I really like this grill. It's super easy to clean (the plates come off and are dishwasher safe), it's easy to use, and it doesn't take up much space. It also opens flat so you can feel like you're BBQ'ing.

Do you have a grill or kitchen appliance that you can't live without? Let me know!