Showing posts from 2019
Show all

This is my go-to program when I don't know what to do and when I still want results. My arms get  CARVED when I follow this program as well as my legs. I do these as circuits - meaning I do one exercise and move onto the next completing all exercises and then repeat again for as many times as I can or have time for. Aim for 2-4 rounds depending on your fitness level and time. This is a 4 day split and you can use it however fits your schedule: Day #1 - biceps, triceps, shoulders Day #2 - legs & abs Day #3 - back, chest, shoulders Day #4 - plyo & abs You can do this every day for 4 days on, 3 days off. You can do them every other day. Or you can just do it whenever you have time to do a workout! Some of the exercise do use a cable machine but you can easily swap them out for dumbbell or band exercises. Just make sure you're working the same muscles or muscle group. I love this split because it is so flexible and can work for so many people.
5 comments
Continue reading »

Hello friends! I know I haven't been blogging much the past few years but I honestly eat a lot of the same stuff so I haven't been creating new dishes to share on here. I have a hard time eating enough vegetables so I try to make one meal a day that has a giant portion of them to make up for the rest of the day. It's usually a salad but my other fave way to squeeze them in is roasting or BBQ'ing them. I love potatoes so I've been opting for an egg and potato scramble for breakfast over my usual egg and spinach sandwich. Topped with cheese, ketchup, and Frank's. Spring mix with peppers, red onion, and cucumber, topped with Kraft Asian sesame dressing. It's high in calories but you can buy the lower calorie option as well. I love this dressing. Side of a Kirkland garden burger with Frank's and sour cream. I don't normally buy veggie substitutes but I saw these and I don't regret finding them haha. These are the Yves veggie
Post a Comment
Continue reading »

Today's post is a recipe for this delicious fajita bowl. I had groceries delivered a few times in January and apparently you are no exempt from buying too much when you're ordering online. I got some frozen veggies to keep on hand since I kept wasting the fresh stuff but then I ordered more fresh stuff when I had the stuff in the freezer... I'm pretty smart :) Anyway, I got caught up on the fresh stuff so onto the frozen stuff. However, you can obviously use fresh peppers and onions for this recipe, I just happened to have a frozen mix of red, green, and yellow peppers, and onions that was perfect for fajitas! I also had fresh mushrooms that needed to be used so I sliced those babies up and sauteed them in olive oil for a few minutes before adding the frozen mix. I used my Epicure fajita seasoning mix but it can be replaced with a homemade mix or store bought, whatever works for you. This recipe made enough for two smaller portions since I don't eat
Post a Comment
Continue reading » 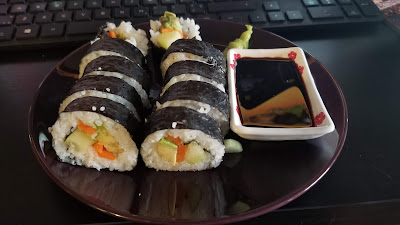 Hello friends! I feel like I've been stuck in a slump the past few months just making the same things over and over again. I forgot about making sushi until a few weeks ago and I've had it 3 times now. It's SO easy to make and you can put literally anything you want in it. I like to use what I have on hand and most of the time I go with avocado, bell pepper, carrot, and cucumber. I like to julien everything so it's easier to roll up. I do have a sushi mat but you can use plastic wrap to assist you and make less of a mess. You can use any rice but I happened to buy sushi/sticky rice. If you don't have sticky rice you can mix in rice vinegar and sugar to assist in making it sticky. Cook your rice according to package instructions and let it cool to at least room temperature Put your nori (seaweed) on your plastic wrap and spread out about 1 cup of cooked and cooled rice. Spread it to each edge sideways but leave 1 inch at both the top and bott
1 comment
Continue reading » 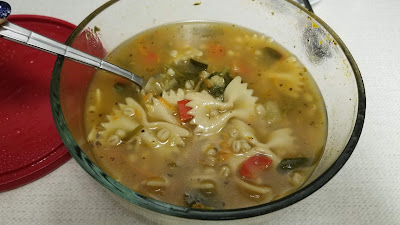